I blame it on professional sports. I love it when team names are tied to their city’s identity, like the Pittsburgh Steelers or the Ottawa Senators. But when franchises are sold and moved without changing the team name, fans are often left with oxymoronic appellations like the Los Angeles Lakers (originally the Minnesota Lakers, Minnesota being the “land of a thousand lakes”). L.A. and lakes? Really? Or how about the Utah (nee New Orleans) Jazz?

The thing is, we depend on names to convey meaning, and the more they cease to do that, the more alienated we are from our surroundings and communities.

To be fair, the problem isn’t just sports teams. Businesses were once reliably named for company founders (think Sears or Nordstrom) or products (General Motors, International Business Machines, or American Tobacco). But in a world dominated by branding, it’s common for company names to be eminently brand-able nonsense words that convey no meaningful information whatsoever. Can you identify what companies like Altria, Syngenta, Xcerra, or Novartis do?

Even our civic space has succumbed. Street names once dependably identified residents or location, so River Road was the street that ran alongside the river and Smith Crossing took you over the creek to the Smith family farm. Today, real estate developers (often with no community ties) invent subdivision street names devoid of any real meaning. They attach idyllic-sounding suffixes like “dale,” “wood,” “brook,” or “field” to places that have no valleys, forests, small streams, or open landscapes, geology be damned. We end up with things like a neighborhood in the desert city of Las Vegas featuring streets designated as Ocean Terrace Way and Ocean Front Drive.  It’s branding run amuck. 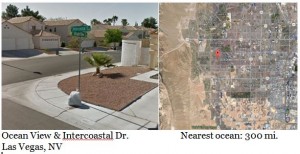 There has always been reason to ask questions about things like street names. If you live in an older city, chances are that most street names honor the lives or interests of the wealthy white men who controlled the city’s development. That should prompt us to ask, “Whose history is omitted?” Such questions produce important insights and occasionally, really fun things, like the New York City subway map with the stops renamed for accomplished local women that is included writer/activist Rebecca Solnit’s atlas of NYC.

Now that names are more and more about branding, and more public venues (like stadiums) sell naming rights, asking questions about “authorship,” purposes, and effects is even more important. Next time you roam your community, tune in to the names on the streets, parks, buildings, businesses, schools, and stadiums. Who named them? Why did they choose that name? Do the names reflect anything authentic about your community’s history or character?  And what is the effect on the people who live there if they don’t?

Arguably one of the most interesting questions is asking whether or not a name is or has been contested? For example, just this month, UNESCO was widely criticized because, in an affront to  thousands of years of history, they passed a resolution that seemingly erased all Jewish ties to the religion’s holiest site, Jerusalem’s Temple Mount. How? By intentionally referring to the site using only the Muslim name, Al-Aqṣa Mosque/Al-Ḥaram Al-Sharif.

It’s not just a matter of language, e.g., using English versus Arabic. Names are used to either reveal or re-write history, reinforce or challenge cultural hegemony. Consider, for example, ongoing disputes over the way the U.S. Park Service identifies a popular Wyoming national monument. Maps and signs currently use “Devils Tower,” even though that name is widely recognized as a mistake made by a U.S. Army colonel in 1875 when his interpreter mistranslated what locals were saying. Attempts by the Sioux and other tribes to correct the error and communicate their sacred relationship to the striking rock formation have faced considerable resistance by local political leaders. Efforts to officially change the name to “Bear Lodge” have failed. The public explanation for rejecting the request is that officials don’t want to waste the time and money spent on a marketing campaign designed to attract tourists to Devils Tower. So branding trumps an opportunity for accuracy, and perhaps a modicum of reconciliation. Hmmm.

Media typically render naming disputes invisible. My own town – Ithaca, NY – is a case in point. In 2006, in response to an initiative by people pursuing social and racial justice, the city voted to add Martin Luther King, Jr. Street as second name to State Street. Yet, Google maps still labels the thoroughfare only as State Street. This is not an entirely outrageous choice. The road has been called State Street for more than a century, and out of habit, many locals still use only that designation. But the result of the choice is that newcomers would never know there is a street in Ithaca named after MLK.

When journalists cover stories involving disputed names, they face even more difficult choices about which terms to use. Should they stick with the status quo? Use multiple names even if it means unwieldy prose? Use a newer name even if it may not yet be in common use? More importantly, once writers have made their choice, do they ever acknowledge that they’ve chosen a side, or do they leave readers/listeners/viewers inadvertently ill-informed because the absence of explanation conveys the false impression that there is no controversy? I wonder what would happen if (at least in online sources) reporters helped the public tune in by hyperlinking disputed names to background on the controversy and the criteria they used to choose terms?

No matter what journalists choose to do, we can tune in to news coverage of communities or conflicts by asking, What role do names play and what do they tell us about purpose, identity, and power? Which names do journalists use and what do their choices tell us about their perspectives and policies? Because, as it turns out, in spite of pervasive branding, names still do have meaning.