As a student in the mid-1970s I roamed my college campus with a button attached to my backpack, intentionally pinned upside down. It said: “Question Authority.” 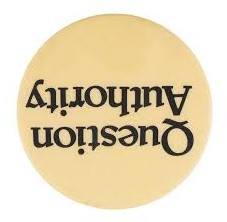 The popularity of the slogan was, in part, a reaction to Watergate and the Pentagon Papers – each of which revealed substantial reasons to stop accepting the government version of events at face value. Added to that, one cultural upheaval after another – civil and women’s rights, the “sexual revolution,” a burgeoning environmental movement – led many of us to question the value of conforming to the largely racist, sexist, homophobic, materialistic reality that had been constructed by parents, employers, clergy, teachers, and media.

The button was actually a shortened version of a quote from psychologist and counterculture guru Timothy Leary: “Think for yourself and question authority.”  And though it wasn’t exactly his intention, Leary identified what would soon become the essence of media literacy education in the United States.

There were two major strands of early media literacy education. The film analysis side was focused on integrating and analyzing films in schools in ways that paralleled the study of literature. The other strand focused on viewing mass media through a critical lens in the hope that students would understand that very few real families looked like the Cleavers (on Leave It to Beaver), that real life heroes weren’t always violent or white men, and that buying the stuff in the ads wasn’t necessarily a great way to stay healthy or happy. In the U.S., it was this latter focus that came to dominate.

Through the Eighties and the decades that followed, media literacy educators developed a practice based on asking questions about the media we consume, use, and create. When most people’s media landscape consisted of a handful of national television stations, a couple of local newspapers, a smattering of magazines, a dozen radio stations, some billboards and store signs, along with dime novels and library books, it was easy to identify the media “authorities” and our questions were fairly simple:  “Who produced this?” “What was their purpose?” “What techniques did they use?” “Who is the target audience?”

Fast forward to the digital world – interactive and offering individuals unprecedented access to larger audiences and more information than at any time in human history. Lines between advertising and other content are frequently blurred, citizen journalism is intertwined with traditional journalism and propaganda, and participation often requires the surrender of privacy. In this world, identifying media authorities is much less clear cut. The sophistication of our questions and questioning needs to match the increasing complexity of the media at our fingertips. We can’t just question authority; we have to figure out how to question everything and still stay sane.

A decade ago, NAMLE made an initial attempt to address the changes by shifting from recommending the teaching of specific questions to recommending the teaching of key categories of questions for analyzing media. Shortly after, Project Look Sharp developed a corollary grid for production activities. Future posts will explore the importance of the shift to categories. Today’s post focuses on how we teach, no matter what questions we use.

One of the major challenges is that even though many U.S. media literacy educators have been very good at teaching students to “question authority,” we haven’t always been very skilled at teaching students to become independent thinkers. Many media literacy lessons, either explicitly or implicitly, simply train students to replace acceptance of media authority with the views of selected cultural critics or teachers. Students learn to parrot what may be a more socially conscious perspective, but they never learn how to do the work necessary to develop their own informed opinions.

To teach students to think for themselves and question authority, the process of engagement is as important to success as the questions themselves.  Here are ten key practices for media literacy analysis in the digital age:

I don’t use a backpack much anymore, but I still have that Question Authority button, it is still pinned upside-down, and I still cherish its message. These days I also appreciate that my ability to question authority in public is a product of white privilege and living in a democracy, however flawed.  I hope that others will take delight in thinking for themselves as much as I do; it nourishes creativity and keeps democracy messy and strong.

You’ll find a deeper discussion of these ideas in The Teacher’s Guide to Media Literacy: Critical Thinking in a Multimedia World (Scheibe and Rogow, 2012)

3 thoughts on “Sixties Wisdom for the Digital Age”