At first glance, developing the habits of inquiry that are central to media literacy might seem too sophisticated or beyond the reach of young children. Some types of questions – like those that require an understanding of purely abstract concepts – may well be too difficult for toddlers and preschoolers. But young children are often capable of more insight than we give them credit for. Often it’s just a matter of finding developmentally appropriate language. Here’s some help: 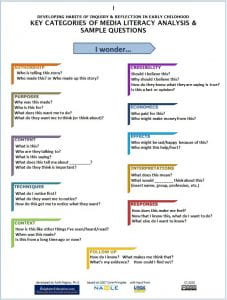 If you’re just starting out, model asking relevant questions as you play with, view, read, or listen to media with children. Weave inquiry into normal activities. Make it routine. And model how to find credible answers. Eventually, encourage children to follow your lead and ask the questions for themselves. Before long, they’ll have a hard time using media without having questions come to mind – and that’s the goal.

If you want to see how the wording of these questions compare to the wording we use with older children and adults, you can download a free pdf from Project Look Sharp.

If you liked this post, you might want to also take a look at MEDIA LITERACY AND OUTDOOR EDUCATION FOR YOUNG CHILDREN .

It’s Media Literacy Week! Take the media literacy pledge: I pledge to think critically about the media I consume and create. http://woobox.com/56mwyp/i2hq7c

After you’ve taken the pledge, check out a week of amazing events and resources, including not-to-be-missed webinars from Project Look Sharp (Nov 1 on teaching Presidential Campaigns), Facing History and the News Literacy Project (Nov 3 on news literacy and implicit bias), and the Media Education Lab (on teaching about propaganda). And there’s so much more. If you’re in St. Louis, join me for a workshop for early childhood professionals on Nov 4 or for parents on Nov 5. Contact the Gateway Media Literacy Partners for details (www.gmlpstl.org).

Halloween is a great time to introduce an important media literacy vocabulary word: “costume.” Help children gain an awareness of how media are constructed by pointing out that they aren’t the only ones who put on costumes. Except for people in news stories, nearly everyone on TV and in movies is also wearing a costume, even when they look like “regular” people. For kids in early elementary grades, you might also talk about the difference between “costumes” (clothes that people wear when they are pretending to be someone else) and “uniforms” (special clothes that some people wear for work).

If your kids have favorite TV programs that feature actual humans (as opposed to animation), you might also search for videos that take viewers behind the scenes, including into the wardrobe department. Here are a few examples:

Keep in mind that these are posted by people trying to entice potential viewers to watch the show and that YouTube has ads and links to other videos. These are based, in part, on your past browsing history and may not be appropriate for young children. Supervise accordingly.

Presidential candidate Donald Trump has spent a lot of time at campaign events claiming that journalists are conspiring against him. There are lots of reason to criticize news media in the U.S. – more on that in future posts – but the notion that journalists are “bad people” and “liars,” especially without citing any evidence, is exceptionally damaging to the prospect of creating a media literate America (not to mention the future of democracy!). Instead of encouraging people to think critically about news media, Trump is asking people to reject the possibility that any news story might have merit (unless, of course, the report confirms his narrative of the world).  So here are a few thoughts for those who are attracted to the notion of news media conspiracies:

Recently, the American Academy of Pediatrics grudgingly recognized the diversity of activities available using electronic screens and they have acknowledged that minimal screen time for toddlers and preschoolers might not ruin children for life and, in some cases, might even have some benefit. I’d be lying if I didn’t admit that part of me wants to say, “I told you so”; I’ve been arguing for at least twenty years that, unless you are talking about very heavy users, what children do with screens is more important than counting the minutes they spend with the devices. If the content or activity is harmful, then the amount of acceptable screen time should be zero. But what if they are doing media literacy?

The thing is, you can’t teach media literacy skills without allowing children to engage with media, including some electronic screens. If it were up to me, I’d mandate purposeful use of digital media as a requirement for credentialing, but I understand why many early childhood professionals resist.

too many early childhood professionals reject media literacy because it involves use of screen media.

We should always look at screen time relative to other activities, using media mindfully and with intention and ensuring that it is part of a balanced day of rich and varied activities. That said, here are my top 15 responses to those who continue to resist integrating media literacy into early childhood education: 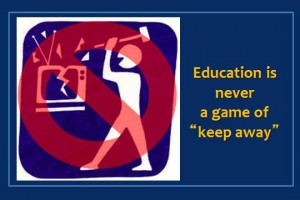 This is especially true because young children don’t typically apply learning from one domain to another. So even if we talk with preschoolers about books and consciously teach critical inquiry skills in the process, they won’t necessarily use those skills in relation to electronic media. If we want children to apply reasoning and reflection to all the media they use and create, we have to model that habit and provide opportunities to practice. That doesn’t mean allowing hours of daily screen time – media literacy is not an “anything goes” approach to technology. But it does require that we use screen media with children on a regular basis.